This post describes the longer (2.5 mile) western portion. (The trailhead to the eastern portion is on the opposite side of Route 9). The trailheads are not signed, other than signs stating "Motor Driven Vehicles Prohibited". Chances are you will only find locals here.

A historical marker notes: "This path was created on the abandoned railroad bed of the Kennebunk and Kennebunkport Railroad Company. The rail line was built in 1883 to bring tourists and residents to the inns and homes which were springing up near the beaches. The rail line was purchased by the Boston and Maine Railroad in 1919 and discontinued service in 1926."

Starting from the utility building, you first cross an open meadow which uses remnants of the old railroad culvert to cross the estuary. Water overflows the path at high tide, which may require wading if you come back at the wrong time! Consult your tide chart! 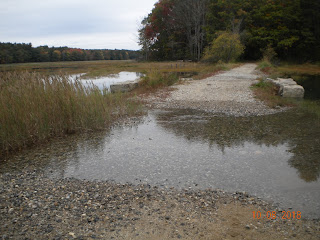 The path continues 2.5 miles to Kennebunk through forest, with lots of water views of the Mousam River; and lots of birds. 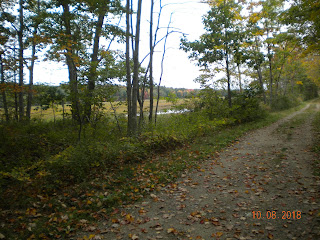 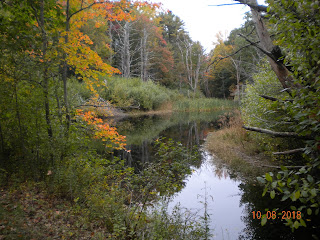 Scene along the Bridle Path

The path provides some peeks at some lovely homes in the area, and crosses several yards, small residential side streets, and the driveway to Sea Road School. At times the trail becomes a rather narrow single-file path. 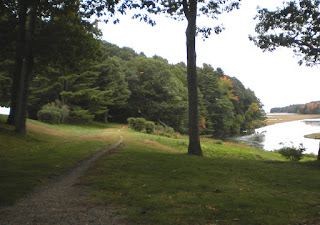 Along the way there is a cemetery to explore, as well as a substantial monument to early settlers which is hidden away in the woods. When you pass the historical marker describing it, look for a side trail (same side as the marker) about 100 feet beyond. 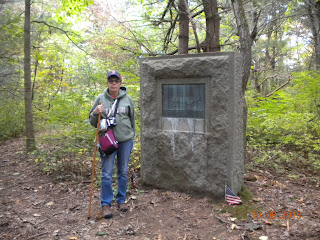 Kathy at the hidden marker.


A wide bench is provided near the trail end, a good spot for a picnic. The path comes to a vague end at the railroad tracks. WARNING: These are live tracks used by the Amtrak Downeaster and freight trains, do not cross them or go on them! Turn right and walk up Trackside Drive past several businesses, including the fascinating Old House Parts. Note the remnants of rails sticking up through the gravel, these are the rails that connected to the former rail line you have been following. You can use the Summer Street bridge to cross over the tracks if you wish to continue to downtown Kennebunk. 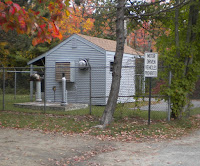 This is the place.

Cost: Free
Hours: Open year round
Picnic potential: no tables, but there is a wide bench at the western end.
Rest rooms: none
Dogs: allowed